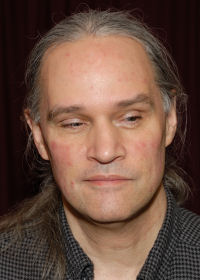 It is with a heavy heart that I need to announce the passing of Dave Simpson WI3Y, who became a Silent Key this morning.  As many of you are aware, Dave had been fighting ALS for the last year or so, but remained active on our weekly 2m net until recently (thanks to the wonderful efforts of Bill K3ZMA).  Dave is also the namesake, and inaugural recipient, of our newly created Outstanding Ham of the Year award, which was presented to him in October.

In addition to being a proficient CW operator, Dave also took part in many Field Day activities with WARC, as well as helping Mark AA3K with his efforts as a test station for WRTC 2014.  In addition to his ham radio adventures, Dave was also an accomplished musician, published playwright, and writer; a true Renaissance man.

Dave’s wife Emily was at his side, today as always.  Please keep them in your thoughts at this time.  Dave will be sorely missed, but his legacy will endure.  May he rest in Peace.